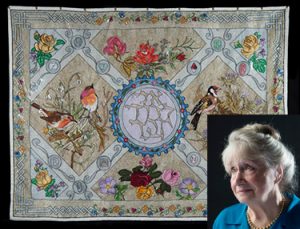 A child survivor of the Stalinist purges and the Nazi Holocaust, Trudie Strobel experienced untold horrors before the age of 10. Indeed, her father was taken by the Soviets before she was even born. Four years later, Trudie and her mother, Masha Labuhn, were herded out of Russia and across Germany by the Nazis.  They were left temporarily in the devastating Lodz Ghetto, only to be transported by cattle car to a labor camp.

Years later, after finally moving to America, getting married and raising two children, overwhelming depression and grief silenced Trudie’s voice.  But while she did not speak words, she communicated through art.  Today, Trudie has rediscovered her voice.  She speaks now, not only to friends and family, but to audiences.  She speaks about her experiences as a child of the Holocaust, of the horror and the loss; she speaks about genocide in general, and the need to identify and nullify the triggers, the patterns, and the forces that lead people and peoples to such dark deeds.  She speaks about the need for kindness, tolerance and what she calls “manners” which is really just decency.  She speaks about art and the power of expression and the strength of benevolent community.

Trudie Strobel’s life and work stand as a testament to the strength of the human spirit and the power of expression.

Tickets for the Video Viewing of Trudie Strobel will be available during December, 2022.